Time to wrap up round 3 of Weapons that can enhance WW3 and today we have what almost amounts to a modern Anti-Tank Rifle (though not actually, it's closer to that of a Light Cannon than anything else.) the XM109 AMPR, or as I'm simply calling it for the sake of the post & degree of realism, the M109 AMPR. A nasty prototype weapon created from the Barrett M82 or the U.S M107 .50 BMG and is even stronger in terms of damage dealing capability than the M82/M107. But, that is enough bla bla!

If you wish to read other Suggestion posts I have made, click the link below. Otherwise, lets get started with the M109 AMPR. 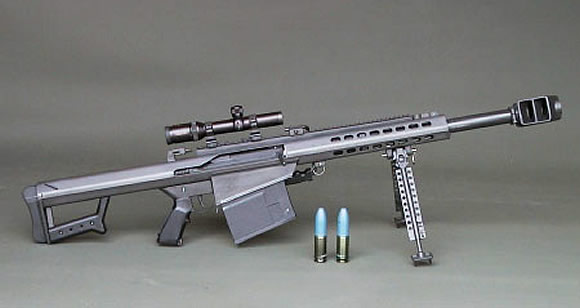 - Still looking for videos over this Weapon.

The Semi-Automatic XM109 AMPR, formerly known as the Objective Sniper Weapon (OSW), is a prototype Anti-Material Rifle/Grenade Launcher created by Barrett Firearms Manufacturing (X being a marking for a weapon being a prototype in the U.S Military.) It's design was based on the battle proven M82/M107 Anti-Material Rifle, using largely the same design makeup to create the XM109 AMPR with the largest change being to the upper receiver to allow the weapon system to chamber the 25x59mm Grenade Round that it fires. The 25x59mm Grenade Rounds currently come in two primary types, High Explosive & Armor-Piercing. However, this ammunition is the same as the cancelled XM307 ACSW (Advanced Crew Served Weapon) project which was designed around creating a 25mm automatic grenade launcher that fired smart airburst munitions. This means that, in theory, the XM109 AMPR can also fire Airburst rounds as well, which when partnered up with the BORS (Barrett Optical Ranging System) ballistic computer, could mean that the XM109 AMPR can accurately place airburst attacks on target wherever the shooter needs them. But, this is a theory right now and overall the current XM109 AMPR Project is currently in a state of Unknown. The project hasn't been officially cancelled nor adopted. When last updated, Barrett was researching ways to reduce the massive recoil of the weapon as the last registry of it was considered beyond Human limitation.

So, if the weapon was to be added to the game, what playstyle would the gun favor, and most importantly where exactly would it stand when compared to generally similar Special Weapons?

If added to the game, the M109 AMPR should serve as a bridge between Precision Sniper Rifles & Special Weapons that favors Defensive players above all else. It's damage should stand somewhere between the TOR & RPG-7, though more towards the TOR above all else. Against enemy Infantry, the AMPR should be deadly on direct impact, and have a small 1.5 to 2.5 meter splash damage radius when using it's stock HEDP rounds (It is firing a grenade round larger than .50 BMG after all.) Against enemy Vehicles the damage should obviously vary between the types. But, AFVs & MBTs should only be damaged by the AMPR if the weapon hits them in the rear with HEDP rounds or if it's using AP rounds for everywhere else. To balance out this weapon it should be Heavy, one of the weaker special weapons (in terms of general damage), high recoil & modest spread to dissuade spam firing, small ammo pool, and should be treated as a AMR (Anti-Material Rifle) which requires players to go Prone before they can ADS with the weapon. In turn the Player gets what amounts to a free (BP cost wise) Light Cannon that can be suppressed, placed wherever they feel is best to take up a position in, doesn't generate a smoke trail back to them, allows some the ability to fire rounds in fairly quick succession for moderately quick multi-hits, and reload the weapon without needing to return to the deployment zone of their team via the Ammunition or Equipment Bag.

Now, lets move on to comparing possible stats of the  M109 AMPR vs. the RPG-7 and the suggested GM-94 & Spike. I made some changes to my color coding system and I think it will give a better picture than the older color coding system I was using prior to this.

Please note:  I cannot test these stats to confirm balance, so think of these as more of a proposed starting place for testing on the PTE, and I'm comparing the stats of the weapons from a stock design against another stock design without taking customization into consideration. This is primarily to help keep the post small and avoid making a massive amount of variables to take into consideration.

Now this part will be rather quick since I don't plan to go over stats or anything like that. Just a quick mention of what customization options the M109 AMPR should and should not have access to in my opinion,

As for bodyparts there is nothing to add since the weapon is still a Prototype. But, the Developers can always get creative with it if they like.

And with that out of the way we're done. I hope everyone likes the idea of the M109 AMPR being added to the game, even if not exactly how I suggest adding it. It's rather tricky to find a variety of weapons in this particular category just like Battle Rifles & Precision Sniper Rifles. There is only so many ways one can differ things that explode, or are used to destroy Vehicles, or lob grenades into a target area, and etc etc...Mainly because of both realistic Human limitations & Technological limitations. But, this will wrap up round 3 of Weapons that could enhance WW3. I'm going to take a little break from these posts after this, mainly to get some other suggestions squared away, wrap up my suggestions for the WW3 Metagame, and some other stuff. So, till I see you at the next suggestion post and the future 4th round of Weapons that can enhance WW3...

0 answers to this question