Time for the 4th round of "Weapons that could enhance WW3" after taking a suggestion break and my first weapon suggestion post of the new year. I made some changes to my general suggestion post layout, mainly because I wanted to try to streamline the posts more, make it easier for me to finish, and overall try to cut down on some of the post length however I can while still delivering what I hope is helpful information. Anyways, I may still need to tweak a few things, correct some typos, late night oversight errors, and stuff like that. But, I hope this new layout/streamlined suggestion post seems better in the long run, especially since after I complete the 4th round of "Weapons that could enhance WW3", I want to do something a bit different that I have been considering for awhile. But, that is info for later on. 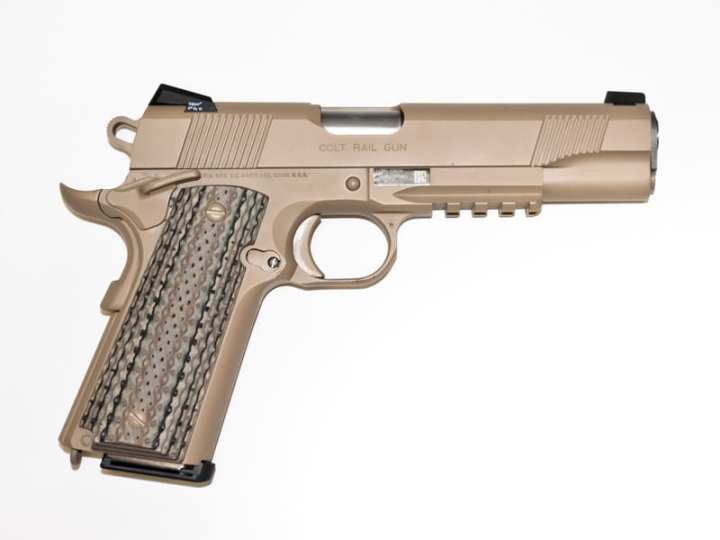 Summary: The M45A1 is the upgraded variant of the M45 MEUSOC and is basically a modern M1911(A1) in everything but name. The M45A1 takes the basic M1911 frame and expands upon it to the maximum amount that can be done without needing to make considerable changes to the weapon itself. It's most notable external features are a modified 1913 style rail which is slightly larger than most 1913 style rails that are found on some 1911 pistols, an extended beaver tail to prevent hammer bite, a rounded hammer over the classic 1911 spur hammer, 3-dot trijicon tritium sights which are fairly common pistol sights these days, and a composite laminated grip to enhance the user's hold on the weapon itself when firing. Internally the M45A1 isn't all too different from a classic M1911 except for the addition of a double recoil spring to dampen the effects of recoil when shooting.  Though the weapon sees very limited service in the USMC community, the reason for it has nothing to do with general performance. The one major issue it had was in regards to the finish of the pistol that was causing some sort of problems and that has since been resolved. The main reason for it most likely not seeing a lot of use. is most likely more do to logistical problems. (IE: there isn't a lot of .45 ACP ammunition on offer to justify fielding more M45 MEUSOCs or upgrading them into A1 variants.) Costs may be another reason as well since the M45A1 is pretty much a high end custom M1911 at the end of the day.

So, what would the strengths, weaknesses, and stats be of the M45A1 if it was to be added to the game?

Section 2 - Strengths & Weaknesses of the M45A1

In this section I'm going to cover what I think the Strengths of the M45A1 should be, what Weaknesses it should have, and finally what I think it's basic stats should be upon entering the PTE servers for testing. In regards to the stats, I will be proposing them from a stock weapon perspective (IE: no attachments/modifications.) This is being done both to keep the post relatively on the small side & not give me a headache in the process of making it. So, lets get started.

Now we move on to weaknesses to help balance out the gun a bit more.

With both Strengths & Weaknesses out of the way, I think the PTE stats for the M45A1 should look something like this-

This part will be pretty quick because I won't be covering stats, just what modifications & cosmetics the M45A1 should have access to..

Because there are so many different customization efforts that have been with this 110 year old gun design, I'm going to keep this relatively simple.

Overall if a Player wants their M45A1 to look like a M45 MEUSOC or a more true to form Modern M1911(A1), then they should be able to capture that look if they want it.

And with all of that out of the way, we bring my first gun suggestion post of 2021 to an end. I hope you like the idea of seeing the M45A1 added to the game at some point, even if maybe not exactly how I think it should be added. I know folks are probably not going to like it because it's not the M1911 in name. But, honestly, the M45A1 is pretty much everything the M1911 is but better in pretty much every regard. Though I get how it may be hard for some to accept the M45A1, especially since the M1911 is pretty much a legendary icon of the gun world like the  AK, M2 Browning, AUG, and etc...Next post coming up will be Assault Rifles and it will be another American Rifle this time around. I know it's a little American heavy for the start, but I have a reason for it I promise. Till the next suggestion post however...

1 answer to this question