As I was working on my suggestion post for the Italian (

) Benelli M4, I stumbled across some older videos regarding the Paradigm SRP - Talon, and after watching them & thinking about some older suggestion posts I made. I figured I would take a chance at pitching a new Strike for WW3 before getting to the next gun suggestion post. While the name of this strike may leave a lot to be desired, the Developers can always make a new name for it if they wish to. I just called it R-O-S-W for the acronym, and overall make the Strike's origin seem flexible to the whole East vs. West concept of the game. Not really a super original idea. But, it's not something (generally speaking) we have in WW3. So...when life gives you lemons as they say...

Quick story - long ago I came up with a new strike category concept simply called "Support Strikes" and originally the idea was to make a category of strikes that didn't have anything to do with attacking/killing enemy players. But, I think, if the ROSW was added to the game, putting it into a strike category called "Support Strikes" would fit very well even if the original concept was designed around the idea of largely non-lethal strikes. i say "largely" non-lethal as really scoring any kills with these types of strikes should either be pure accident or entirely just dumb levels of luck. Anyways, that is enough bla bla, lets get to it! 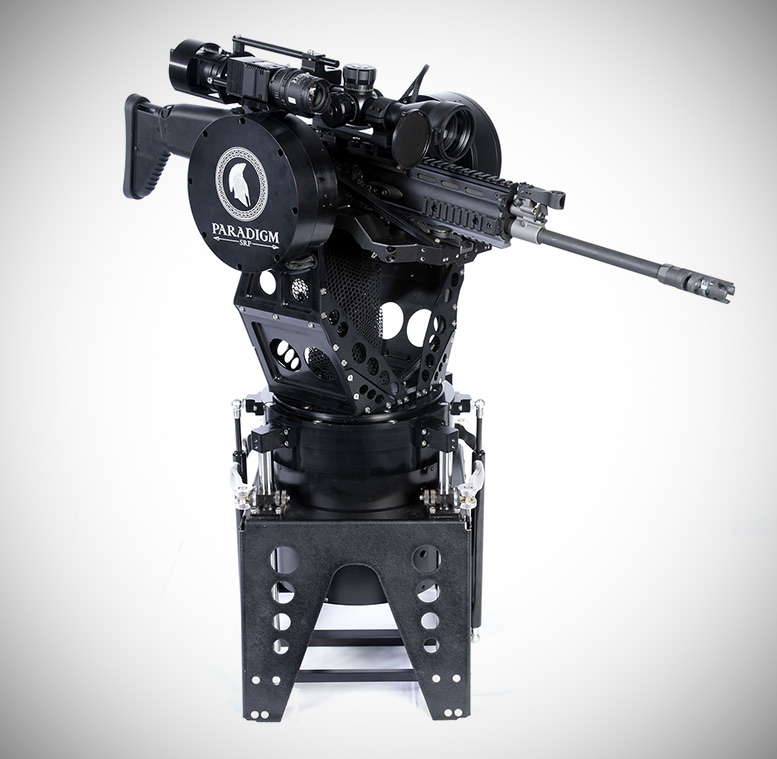 I drew inspiration for the ROSW from the (Above) Paradigm SRP - Talon and from all the RCWSs currently in WW3.

The strike concept of the ROSW (Remote Operated Sentry Weapon) is very simple; a defensive, stationary, remote operated turret that can turn 360 degrees, fire a variety of small arms ranging from a SMG to a .50 BMG Sniper Rifle, and can even be upgraded further with a Automated System that will engage hostiles at the most optimal, effective range for the weapon & caliber (Will go into greater detail further down the list in the Stats & Customization of the ROSW section regarding the Automated System.)

The way a Player should call the ROSW in is very simple. First have them select any location on the map (excluding out of bounds & enemy deployment naturally) to deploy the ROSW, after that have the Helicopter Drone fly down to deliver the container housing the ROSW in it. While the Turret is inside of the container, the Turret is marked unclaimed, and anyone is able to pick it up. Once it is picked up however, the person who ultimately claimed the ROSW will then incur the following penalties while CARRYING the ROSW-

I know some may not like these incurred penalties while they're carrying the ROSW. But, this is being done to discourage (not prevent) Players from running around the map with the ROSW like it's an offensive support weapon to just be dropped in place the moment they spot an enemy. When the Player can deploy the ROSW, they will need to find a suitable flat surface, and can use a translucent model of the ROSW to see exactly where they will be placing it the moment they go to deploy it. Once the ROSW is deployed on the ground, the player will no longer suffer the penalties that come with carrying the ROSW.

Finally the ROSW should have 3 sub-systems.

So, if the ROSW was added to the game, what would it's strengths & weaknesses be?

Section 2 - Strengths & Weaknesses of the ROSW

In this section I will cover what I think  the Strengths & Weaknesses of the ROSW should be.

Now for weaknesses to balance things out a bit.

With the Strengths & Weaknesses out of the way. What sort of Stats & Customization should the ROSW have?

Section 3 - Stats & Customization of the ROSW

In this section we will be covering the basic stats of the ROSW and what customization options I'd personally like to see it have. Now, admittedly right now, I'd like to see a little more complexity in it's customization options compared to other Strikes. The reason for this is because the ROSW, ideally in my head, should perform entirely depending on what sort of weapon it's equipped with. Want it to mainly secure a stairwell? Consider mounting a MCS, VEPR-12, SIG, SA80, or any sort of CQC minded weapon on it. Want it for long sight lines to act as a remote sniper station? Equip it with the G29, Tochnost, 417, or some other weapon good at reaching out to long distances. Naturally all of the weapon choices will have their benefits and drawbacks depending on the weapon that is selected. So a mounted Machine gun may have a higher magazine/total ammunition capacity than other weapons. But, have a slower turret Rotation speed, longer reload, and higher BP cost as a example.

Now for actual customization options that should be allowed with the ROSW.

I think that covers everything, though I wouldn't be shocked if I forgot to include something (kind of the price to pay with these longer posts & burning the late night oil.) But, with all of that out of the way, it's time to begin wrapping this post up with ways to hard/soft counter the ROSW.

So, what ways can the ROSW be countered by enemy players? Well, a lot of different ways actually. Unless you're bull rushing a ROSW, there are more than a handful of ways to come out on top against it. Hell, some of them don't even require the Player to put themselves at risk of dying to it at all. So, here are some ways the ROSW can be countered.

Ultimately it's a weak (health/armor wise), stationary target that cannot move around without the assistance of the player that claimed it. At that point, you're getting a 2 kills in 1 deal with the Player picking the ROSW up. So if anything I either proposed a very well balanced strike or a very weak strike (which works given that nobody can claim it's overpowered and that means improvements can be made gradually over time.) It can't move on it's own...it's literally just going to sit there unless the player attempts to move it, and even then the Player is going to incur the penalties to move it. If you cannot counter the ROSW when it's deployed or when it's being moved, the problem isn't the strike....(unless it's bugged/glitched of course! But, that is a whole other matter.)

With all of that out the way, we can now truly bring this post to an end. I hope everyone likes the idea of the ROSW (Remote Operated Sentry Weapon), even if maybe not exactly how I proposed it. The Developers could make this an even less complex strike than what I suggested. But, when I saw the Paradigm SRP - Talon, I saw a lot of different potential uses with it. Ultimately a lot of the uses I had in mind I actually cut out to keep the Strike from being overpowered...I may have even made it underwhelming ultimately. But, that is why I'm posting this on a forum, so I can make changes where I need to. I actually thought about allowing the ROSW to use Special Weapons and some of the RCWS turrets as well, which the Developers could do if they want to add this into the game. Hell, they could go even more simplistic and just make it a simple Stationary RCWS if they would like to have such a defensive, remote operated turret.  Like any suggestion post I make though; I merely make the suggestion posts, the Developers can choose to do with them whatever they desire. For now though, the hour grows late, I need to get some sleep, and later today I will get back to working on "Weapons that can enhance WW3." Till the next suggestion post however...

0 answers to this question