Had some real life matters demand my attention before I could get around to wrapping up my 4th round of Weapons that could enhance WW3 and today I thought I would revisit an old Weapon that I suggested long ago - not that nobody else has suggested this weapon before. It's massively popular as one of only two Cold War Era Battle Rifles that really still see's noteworthy use on the modern battlefield and that is the popular German G3 Rifle. Won't bore you with a lot of chit chat now, I have a special weapon to get to before I can start a new series of suggestion posts of sorts. So, lets get to it! 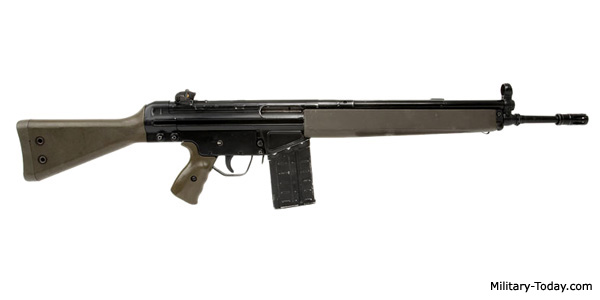 Summary: The German G3 Rifle is a bit of strange tale during the Cold War era. Germany purchases 1000 FN FALs from Belgium, basically wanted to license build them in Germany, the Belgians were not very fond of this idea which caused Germany to go back to the drawing board...Germany then turned to Spain which was busy working on the CETME Rifle (A weapon inspired by the French CEAM Modèle 1950) and Spain was also a bit hesitant with Germany (Keep in mind this all took place after WW2.) Eventually a deal would be struck between Germany & Spain and Germany would go on to start developing the G3 Rifle using the CETME 58 as the basis for it's design. This would then pave the way for Germany to develop one of the few, if not only, Cold War era Battle Rifles that actually still serves a considerable role on modern battlefields when so many others are either no longer being used at all, are reserved for Ceremonial usage, kept in Reserve storage, or some other non-frontline combat usage. The weapon has beyond proven reliable, it's simple to make (by firearm manufacturing standards of simple), inexpensive, easy to field strip & clean, and just overall generally keeps going even while getting roughed up. Plus as a benefit for those shooting the weapon, the side folding charging handle doesn't slide back with each shot (IE: It's non-reciprocating), and for H&K fans you're fully encouraged to slap that charging handle when loading a magazine.

So, what would the strengths, weaknesses, and stats be of the G3 if it was to be added to the game?

Section 2 - Strengths & Weaknesses of the G3

In this section I'm going to cover what I think the Strengths of the G3  should be, what Weaknesses it should have, and finally what I think it's basic stats should be upon entering the PTE servers for testing. In regards to the stats, I will be proposing them from a stock weapon perspective (IE: no attachments/modifications.) This is being done both to keep the post relatively on the small side & not give me a headache in the process of making it.

Now we move on to weaknesses to help balance out this Battle Rifle.

With both Strengths & Weaknesses out of the way, I think the PTE stats for the G3 should look something like this-

This part will be pretty quick because I won't be covering stats, just what modifications & cosmetics the G3 should have access to..

With the G3 serving so many different countries, it's really not surprising that there would be a decent bit of customization that would go into the weapon when so many different Nations use it. I'm sure there is more than what I listed. But, the list was starting to get huge.

Overall it seems the developers have plenty they can work with and we could theoretically get different weapons in everything but name out of the G3. Such as the MC51 which is a UK Machine Carbine born from the G3, both the Norwegian AG-3F1 and AG-3F2 variants of the G3, the Swedish AK4, and naturally the PSG-1. Maybe even the Spanish CETME Rifle as well, though I will need to do deeper research on that when I'm not burning the late night oil.

And with all of that out of the way, we bring this post to an end. I hope everyone really likes the idea of seeing the G3 added to the game, even if maybe not exactly how I pitched it. Battle Rifles are (as I have stated before) rather tricky to make suggestion posts for. Many of them are not all that different from others aside from general looks, where they're from, and from time to time the customization options they have. I did make a mistake though the first time I suggested this weapon. I said that it should have a 3 round burst fire mode..this is technically incorrect as the G3 has no burst fire option. BUT! It's trigger mechanism does allow for that 4th fire mode to be added to the gun if someone wanted it, which was seen through the German (

) HK21 as an example. But, that is all enough for now, the hour is growing excessively late, and I have another post to make. Till the next weapon suggestion post~

PS: Will make any fixes/post corrections after I rest. I didn't know when I would lose my progress on this post, so I wanted to get it out A.S.A.P before it happened.

6 answers to this question